This article digs into the historical context for deregulation – a process which had been on-going for a number of decades. 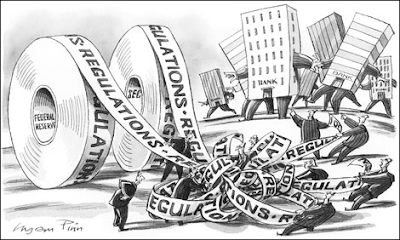 The full extent of the financial deregulation process began in the 1980’s.
It was at this time, that financial deregulation through government policies, allowed for the banks to diversify and expand their financial activities.
By then, the Canadian financial services sector was not divided into distinct “pillars” of specific financial institutions such as banks, insurance companies, brokerage firms, and trusts.
From the 1930s until the 1960s, Canada’s financial institutions were regulated according to the “pillar” system.
Under the pillar system, Canada’s financial system operated under 4 distinct pillars: chartered banks, insurance companies, trust companies, and investment dealers.
Each of these were regulated as separate financial institutions. Each pillar carried out functions that were separate and distinct from that of the other pillars and virtually no overlap among the pillars was permitted.
The Great Depression of the 1930’s brought grave concerns of the solvency and stability of the banking system, which prompted a wave of bank failures (particularly in the United States) during the Depression.
This motivated Canada to move towards this form of regulation, which was designed to guarantee the independent functioning of each sector and to minimize the possibility of negative spillover from one pillar to another.
In this pillar system, an individual would save their money or receive a loan from a bank.
An individual would purchase stocks and bonds from a broker. An individual would buy insurance from an insurance agent. And an individual would buy mutual funds from a mutual funds sale representative.
However, due to government changes in regulation, this pillar system was eventually disbanded and financial consolidation within the big banks was allowed and this led to a convergence of financial power, and versatility, where most of an individual’s financial services and products could be obtained through a handful of financial institutions.
Until the 1950’s, the core functions performed by each pillar remained quite separate and distinct. The main reasons for separation were to ensure stability and to avoid conflicts of interest. So for example, under a pillar system, a bank providing loans to a given firm and underwriting and selling that firm’s securities would face a potential conflict of interest.
And as it stands today, in this increasingly fiscally liberalized era, much consolidation was committed between the ‘Big 5′ Canadian banks, and brokerage firms and trusts. The shape of Canada’s financial industry today has become dominated by a small handful, of large, diversified financial conglomerates functioning on a transnational scale.
To truly understand just what was deregulated in the financial services, it is important to learn what was regulated in the first place; in attempts to make for a more sound and stable banking system. These factors are looked in depth below.

1957 – THE FEDERAL GOVT PASSED LEGISLATION THAT FACILITATED THE CONVERSION OF THE LARGEST STOCK LIFE INSURANCE COMPANIES INTO MUTUAL COMPANIES OWNED BY THEIR POLICY HOLDERS. A NUMBER OF MAJOR FIRMS INCLUDING CANADA LIFE, MANULIFE, AND SUN LIFE, TOOK THIS ROUTE WHICH PROVIDED PROTECTION AGAINST FOREIGN TAKEOVER.

1967 – THE INTEREST RATE CEILING ON CHARTERED BANKS WAS REMOVED. IN ADDITION, CHARTERED BANKS WERE PERMITTED TO PROVIDE CONVENTIONAL MORTGAGES AND LOANS. ALSO, REVISIONS WERE INTRODUCED TO THE BANK ACT PROHIBITING FOREIGN BANKS FROM OPERATING BRANCHES OR SUBSIDIARIES IN CANADA.

Also in this year, the 10/25 rule was introduced so as to reduce foreign ownership of Canadian banks.  Under this rule, no single investor could hold more than 10 % of a bank’s voting equity, and foreigners in aggregate were prohibited from owning more than 25 %. This 25% rule would require banks to be widely held to help ensure the separation of financial and commercial activity and prevent the possibility of questionable self-dealing between a financial institution and its major shareholders.
While the provisions limiting foreign ownership were phased out by the Canada-US Free Trade Agreement, NAFTA, and GATT,  the banks are still required to be widely held.

1980 – AMENDMENTS WERE INTRODUCED TO BRING FOREIGN-OWNED BANKS UNDER FEDERAL REGULATORY CONTROL. PREVIOUSLY, FOREIGN OWNED BANKS WERE PROVINCIALLY REGULATED, AND IT WAS HOPED THAT PLACING ALL BANKS UNDER THE SAME REGULATORY REGIME WOULD “LEVEL THE PLAYING FIELD” AMOUNG BANKING INSTITUTIONS.

Also in 1980, foreign banks were permitted to establish banking subsidiaries in Canada, however they were classified as Schedule II banks. Provisions were included in the bill, to prevent Schedule II institutions from competing in certain markets.
However, a ‘ceiling’ limit was placed on the size of the total foreign banking sector, equal to 8% of total banking assets in Canada. Amendments were introduced to bring foreign-owned banks under federal regulatory control. Previously, foreign owned banks were provincially regulated.

1987 – BANKS WERE PERMITTED TO OWN BROKERAGE FIRMS AS SUBSIDIARIES

Also in 1992, when the pillar system was removed, another major reform was introduced. Until this time, the chartered banks were required to hold reserves with the Bank of Canada. Reserves were intended to serve as protection against insolvency and allowed the central bank to influence the money supply by adjusting reserve levels.
However, the banks had complained for years, that reserves constituted an unfair ‘tax’ that placed them at a competitive disadvantage compared to other financial institutions. Thus bank reserves were quietly phased out over 2 years starting in 1992. This major concession to the banks was enacted by the Mulroney government with little public debate or awareness
Also permitted under the amendments, financial institutions were granted permission to own corporations that carry out related financial services, such as the purchase and sale of accounts receivable. Furthermore, financial institutions were permitted to own up to 25 % of shareholders’ equity or 10 % of voting shares of non-financial corporations.
As a result of these revisions to the federal Bank Act and other legislation's, there has been a substantial breakdown of the pillar system and many of the barriers to entry in the financial services industry have been either eliminated or reduced.
As a result, the focus of financial service regulation has shifted from concerns about solvency to a focus on competition.

With the permission to allow foreign banking subsidiaries in 1980, the federal government took additional steps to open the financial services sector to foreign interests in the late 80s.
The Canada-US  Free Trade Agreement (FTA) deal was crucial in its inclusion of services including financial services, in a trade liberalization agreement.
Through the signing of the Free Trade Agreement, US interests were excluded from the limits on foreign ownership of specific Canadian banks, which is the the 25% rule brought about in 1992, as well as the foreign ownership of the Canadian banking sector as a whole.
With the signing of the North American Free Trade Agreement (NAFTA), Mexican interests were also excluded from the regulatory limits as well.
Through the Uruguay Round of GATT and the development of the General Agreement on Trades in Services (GATS), these limits were removed altogether in 1994.
As has been presented above, since the 1980’s, successive Canadian governments have encouraged, and nurtured the increasing consolidation of financial power.
Public policy on all levels has also followed on the recommendations made by the major banks and the corporate boards of Canada. Thus, looking back, it can be said the Federal Government’s open embracing of neo-liberalism has generously benefited the Canadian banks.
I leave you here with this comical image of the financial crisis. 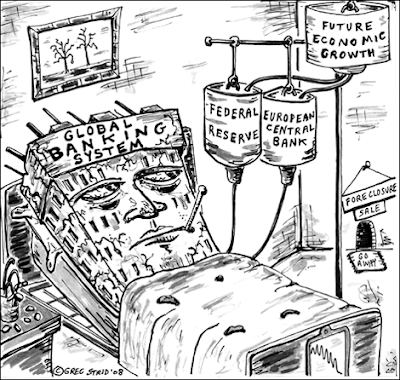 The Banking Empire Deregulation of Canada's Financial Industry Part 3: looks at how financial deregulation has assisted the big 5 Canadian banks to expand their business internationally.
This has created an international banking empire, which has expanded into the international market due to a market liberal environment 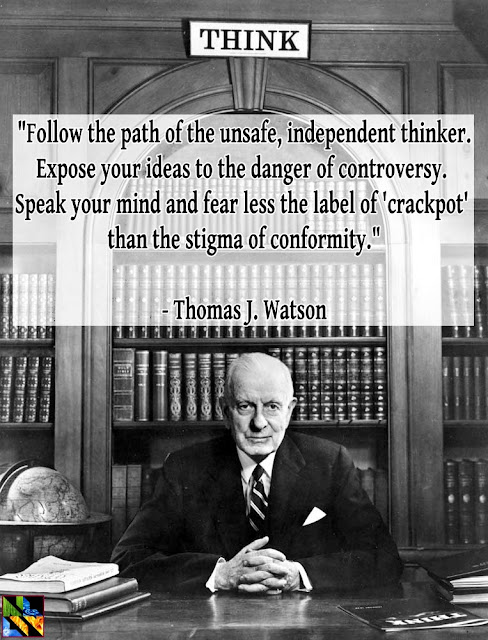